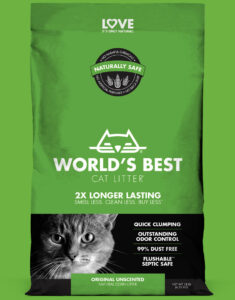 Some time ago I was offered a free box of World’s Best Cat Litter in return for a review on the blog, and I kind of jumped at the chance with unseemly haste.  Anything that promises to make the litter chore easier or better is too good of an opportunity to pass up.  So I promptly agreed, and shortly after received a small box of corn litter to try out.   Full disclosure – I don’t do cat litter. I used to, and found the job disgusting, and spent a fortune on a Litter Robot which is God’s answer to cat litter management.  It worked phenomenally well, I loved it, and that would have been the happy ending, except for my ex broke it one day.  And I said,  since you broke it, you feel free to clean cat litter, cause you see I had a ROBOT that did it, so feel free to either replace it, or manage the cat litter single handedly.  And he’s been doing the cat litter solo since then, and  all World’s Best Cat Litter observations are his.

My impressions were – this ain’t gonna be enough litter, yo. We have two giant litter boxes for four cats, which we spot clean every day or two, and fully empty once a week. This system works pretty good, although not nearly as good as my Litter Robot. So we set up a small litter box full of World’s Best to see how it would play out in the arena.  All the boxes were fully clean and ready to go in a nod to scientific consistency.   My cats LOVE it when their litter box is cleaned, so they were pretty much a ready audience when we (ex) were done with the litter set up. They are also creatures of habit, so first they were fascinated with their old clean boxes. Other than a perfunctory sniff not one chose World’s Best until the regular boxes were soiled. But you know what? Cats are like kids and old people – rather change averse., so that means nothing.  The litter comes out of the box smelling freshly grassy with a faint corn scent and pours very nicely compared to clay, by the way.

Three out of four cats proceeded to use WBCL and it was pretty darn good. There is far less dust raised when pouring the litter, scooping, or raking maniacally by cats. It clumps completely and is really far superior to clay at holding urine smells at bay. All the cats continued to use it as their regular boxes got smellier, so they can definitely tell the difference.  The stuff can be flushed too which we didn’t test cause we (ex) were already cleaning clay, but I’m sure it’s safe.  Not so much good at keeping poop smells at bay, but really, nothing is. Except the Litter Robot.  Because we had three cats using it, we went through it pretty quickly despite the fact that we dumped out less litter clumps per sweep.   Verdict – it would be immensely worth trying for a one or two cat household. Because we have SO many cats we would need a pallet of this stuff. And of course it’s more expensive than clay. Because you use less overall litter, it should last far longer than clay, but in our case it still went pretty quickly.  Odor control is excellent at the start of the box, and diminishes with time, as does clay. Dust is less but it will still track a bit.  You really have to try a bag for longevity to see if you get any cost savings, my guess is probably.   Is it the answer and the holy grail of cat litter management? Not really.  It’s still litter, you still scoop it, it will still smell depending on how heavily it’s used.  If you mixed it with the Litter Robot though, I think you would be as close to nirvana as cat ownership gets.

← Back in the saddle again! When life falls apart →
We use cookies on our website to give you the most relevant experience by remembering your preferences and repeat visits. By clicking “Accept All”, you consent to the use of ALL the cookies. However, you may visit "Cookie Settings" to provide a controlled consent.
Cookie SettingsAccept All
Manage consent