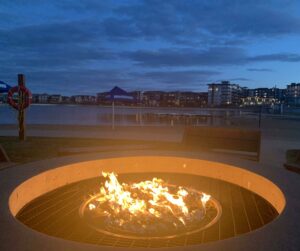 The quiet steady life as I knew it fell apart in May 2012. My father was painfully waiting for his aorta valve replacement surgery, and he didn’t make it to the surgical ward. He collapsed outside of his house and while his neighbors valiantly tried to resuscitate him, it was too late.  Just a week prior he checked himself into the emergency room, and cited excruciating pain and problems breathing, but was discharged with no instructions for bed rest, immediate admittance or moving up the surgery date. Say what you will about our medical system, but in our family this is the second time they have failed to provide prompt medical attention with ghastly results. (My brother waiting 48 hrs for an appendectomy that led to sepsis being the first one).

His premature passing led to a cascade of unintended consequences. He died with a handwritten will that he gave to me just a few days before his death, wheezing and puffing, his legs swollen with severe edema. The will had some unique provisions that led to a protracted probate process. His house could not be unattended for insurance and complex legal purposes, so my boyfriend at the time and I packed our house and cats and moved into my fathers’.  Worst of all, my grandmother was left alone with rapidly progressive dementia. She was 89 at the time of his passing, and had only light symptoms of cognitive decline. After her sons death it progressed quite quickly, and I was left as her power of attorney. Her other son, my uncle, lives in California and it would be too hard for him to have stewardship over her numerous health affairs from over there.

My father’s house was cluttered, as though he was practicing to audition for hoarders but couldn’t quite commit himself to go all out. From his 1,200 square foot house we’ve thrown out at least two full dumpsters of stuff. The large ones that you pay someone to drop off and tow to the dump when you’re done. Unfinished projects, a work library that he will no longer need, scraps and bins and bags and piles. Anything salvageable was donated to the goodwill, or spread out across friends and family members. As though sensing it was without his owner, the townhouse proceeded to fall apart one expensive item at a time.  Most of the appliances stopped working within a month. The hot water tank went a short while later. The heavy, brass tub faucet exploded from the tub denting the ceiling. The toilet leaked, a railing collapsed, the house number fell off and swung comically from its hinge.

My grandmother suddenly needed a great deal more care. As her illness progressed she moved from nursing home to nursing home with ever increasing levels of security. At the beginning there were instances where she would leave to go on imaginary errands, get lost and be returned by a kind police officer. The meetings with her nurses and doctors became more frequent. She needed more and more attention and constant involvement in her care. Anyone who has cared for a relative through a progressively worsening illness knows the relentless and difficult tasks that must be done and the hours and hours of driving to and from doctors, nursing homes and medical supply stores.

My thirteen year relationship imploded under the sudden realization that life is short and we are nothing but roommates. It was a good and companionable relationship in some ways, and in many ways was full of deep and irreconcilable differences. The kind that often creep up when you start dating in your early twenties and grow into very different people over the next decade. The breakup was dramatic in some very inconvenient ways, but settled into a relative lack of resentment over the next couple of years.  The breakup fallout ended a deep and beautiful but flawed friendship with my best friend of 20 years, simply because I had no emotional bandwidth for anyone but myself.

In the meantime I was entering the home stretch of my accounting designation program, and for lack of a better expression, shit suddenly got real. All my final course textbooks had lofty titles like Auditing: The Art and Science of Assurance Engagements, or equally readable Modern Advanced Accounting in Canada, and the final exams for the designation were purported to be grim. Just reading the how to prepare for these exams had me in a cold sweat several times. Anyone who’s written professional exams knows the stress, pressure and the high stakes of that time period. It’s basically a time to bow your head, study, exercise for sanity and pray. In my case the stakes felt extra high as I had to challenge advanced taxation as well as write the two four hour exit exams. Since I was in the last session of students before the final amalgamation of designations, I had only one chance to pass the exam. If I failed, I’d have to continue to the CPA program and take yet another exam prep course and write an even more challenging exam. No pressure.

Life became a relentless attempt at survival. Every moment of every day was allocated to something useful. Work breaks were for studying. Sunday mornings were for grocery shopping. Lunch breaks were for handling the endless demands from grandmother’s care team and my father’s estate. Self care was reduced to really, really enjoying showers and meals and sleep.  Meditation and exercise became critical – I meditated on the bus on the way to work, and exercised on the walk home from work, or the odd weekly workout. Practicing mindfulness changed from an abstract exercise to a very real necessity to protect the mind from the relentless barrage of things to do, hard stressful things to do that marched on and on like a grim parade.  There were times when curling up in the fetal position was the only sane thing to do, and my sense of humor was getting downright grim. And there were days when I felt like a hunted animal besieged by forces beyond my control, all clamoring for attention. Grieving had to be done piecemeal while dealing with lawyers, doctors, grandmother, school, revenue canada, a brother and cousin struggling with a drug addiction, a mother who needed support, house repairs and a new job.

In a moment of desperation I went to see a respected feng-shui professor, a family friend of a girlfriend. I was sick with a bad cold and pumped full of medication. It was a dark January evening and as I sipped hot tea in his kitchen I was barely able to follow his drawings. He laid out my horoscope and house plan. He told me that from 25-36 would be the hardest decade of my life. Everything would be hard – work, school, family, you name it. Everything would be a struggle and I tell you, did I want to say ‘you’re not kidding, I’m living it,’ but my throat hurt too much to talk.  Then he told me that 36-45 would be the happiest decade of my life, and the one after that the second happiest. I was 33 at the time, and had 3 more years to go albeit with hope that there is a light at the end of the tunnel.

I clung to that prophesy as my life slipped into an ever speedier cycle of all-the-things-to-do. I developed a bit of PTSD towards mail and phone calls, cringing when the phone would ring and leaving unopened mail, knowing that some crappy, onerous, stressful task would be required the moment it’s opened. I’m not saying I lost my sense of humor entirely, but it definitely frayed and became more caustic than usual. At the same time, small non-essential problems became very insignificant. At one point I remember thinking, ‘is anyone going to die because of x,y,z? No? Then it’s not even on my radar.’  And I helped myself as much as possible. I recruited my mom to help with grandmothers care as much as she could. I divorced my brother to eliminate a ten year source of stress, I maintained a weekly dinner or drinks date with my friends as a sanity straw.  And to their credit they heard me out over and over.  Improbably and unbelievably I fell in love. And those things sustained me in a very real and deep way when everything felt like it was crumbling over and over and over again like a fragile house of cards in a hurricane.

I learned to cope by breathing through pain, mindfulness, humor and through reflecting on life’s inherent absurdity, and brevity and fragility.  Now that school is behind me, I am still in recovery mentally and emotionally. And still dealing with remnants of that period of life – estate business still rears its ugly head periodically, school is done but getting the designation is still pending, the old house occupied by the ex is up for sale and not selling, and the deep economic recession that is gutting Calgary is still here. My brother still struggles to find his way in life, and my mother is entering her second year of unemployment. I am watching close friends lose jobs, and not be able to find anything remotely suitable. I am watching this bustling city become sheltered and reserved, with critics saying there will be no recovery swift or otherwise.  America’s new president is certainly a surprise. And yet life is still beautiful, there is still love and all of us on this journey together. And it is a wonder to behold.

← On kitty litter Traveling via Home Exchanging →
We use cookies on our website to give you the most relevant experience by remembering your preferences and repeat visits. By clicking “Accept All”, you consent to the use of ALL the cookies. However, you may visit "Cookie Settings" to provide a controlled consent.
Cookie SettingsAccept All
Manage consent